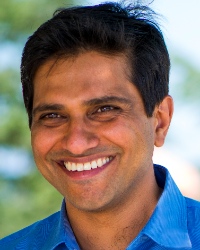 Vikas is Founder and CEO of Wonder Workshop, and drives the companyâ€™s vision, strategy, and growth as it brings products into the hands of children around the world. Vikas learned to program using BASIC when he was 14 years old and later went on to start a company, Jambool, that was acquired by Google in 2010. Previously he led the payments and web services groups at Amazon. Vikas is a father of two, and it was the time he spent with his daughter, his first child, that inspired him to start Wonder Workshop.